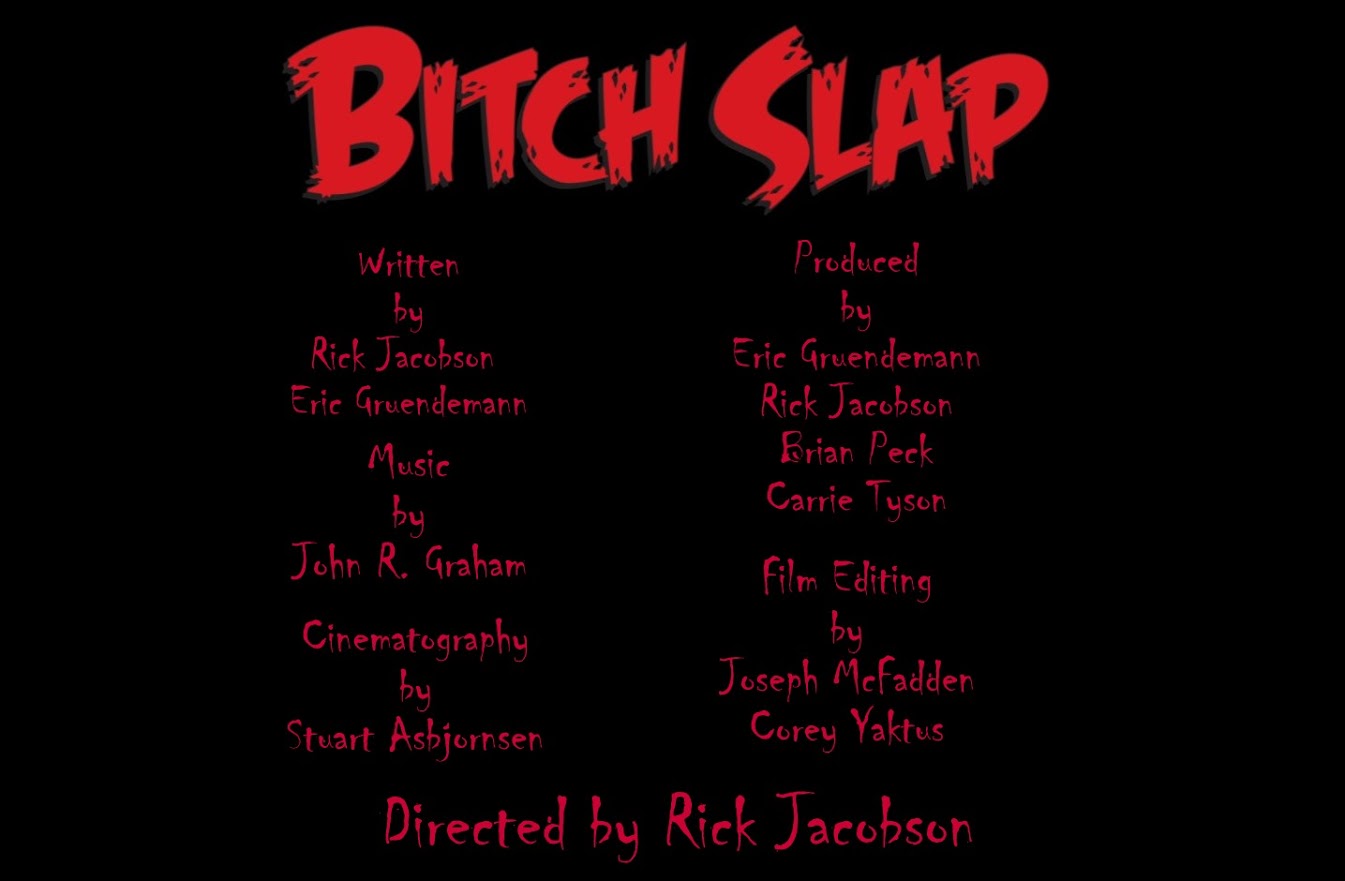 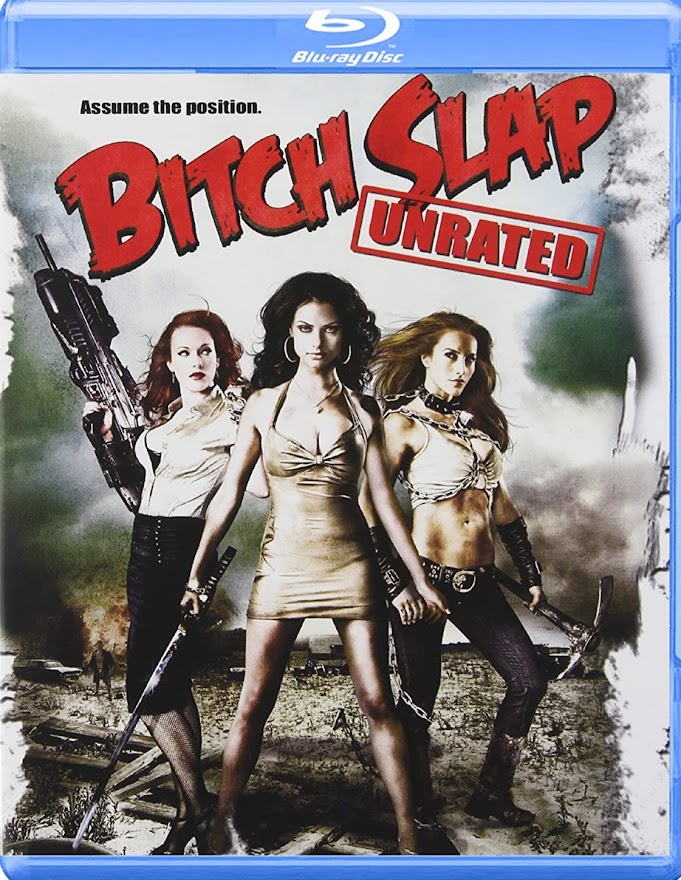 Up until a few days ago, I didn’t know that a Bitch Slap movie existed.

I’d been watching some video’s on YouTube of commentator and podcaster, John Campea.  I latched onto his YouTube broadcast a couple of weeks ago strictly by accident when it popped up with his commentary regarding the Scarlett Johansson/Disney mess.

Some of his videos had an attractive blonde co-host by the name of Erin Cummings.  At one point he referred to her as being an actress.  Actress in what?  Until that moment, I had never heard of Ms. Cummings.

I decided to find out what it was I had missed and one of the first things that came up  was a movie called Bitch Slap.  I looked it up on Amazon and decided that a movie called Bitch Slap just had to be seen, although one can pretty much tell what kind of film they were getting just from the title and the cover of the Bluray which featured three beauties apparently out to kick some ass.  Besides, it was only $10 and considering what the movie’s grosses were, the makers of the film could use the money.

I’m not sure if the producers and director (Rick Jacobson, who has a long list of TV Credits) were trying to pay homage to Exploitation Grindhouse Movies in the same vain as Quentin Tarantino did with Kill Bill I & II, and the double feature concoction of Planet Terror and Death Proof that made up his Grindhouse feature.  Maybe they were just poking fun at or satirizing the genre.  They even seem to have cloned one character by the name of Kinki (Minae Noji) from Kill Bill’s very own and very deadly Gogo Yubari.

The plot, as far as I can decipher it, has three young Amazonian big breasted women, Trixie (Julia Voth), Hel (Erin Cummings) and Camero (America Olivo), out in the desert looking for something or other.  For this, they need the help of Gage (Michael Hurst) to help them locate the watchamacallit buried somewhere out in the desert.  When he refuses, he basically signs his death warrant although our trio of treasure hunters aren’t above dishing out some torture beforehand.

Later Police Deputy Fuchs shows up to see if he can lend a hand when they tell him their car is on the blink.  He seems especially captivated by Trixie, but somehow manages to be on his way down the road before someone gets an itchy trigger finger and shoots his badge right off his shirt.

It isn’t long before we start getting flash backs that jump backwards a few hours, then a few days, a few weeks, a few months and I think a few years if memory serves me correctly.  I guess this is to fill us in on more details of the plot, such as it is. 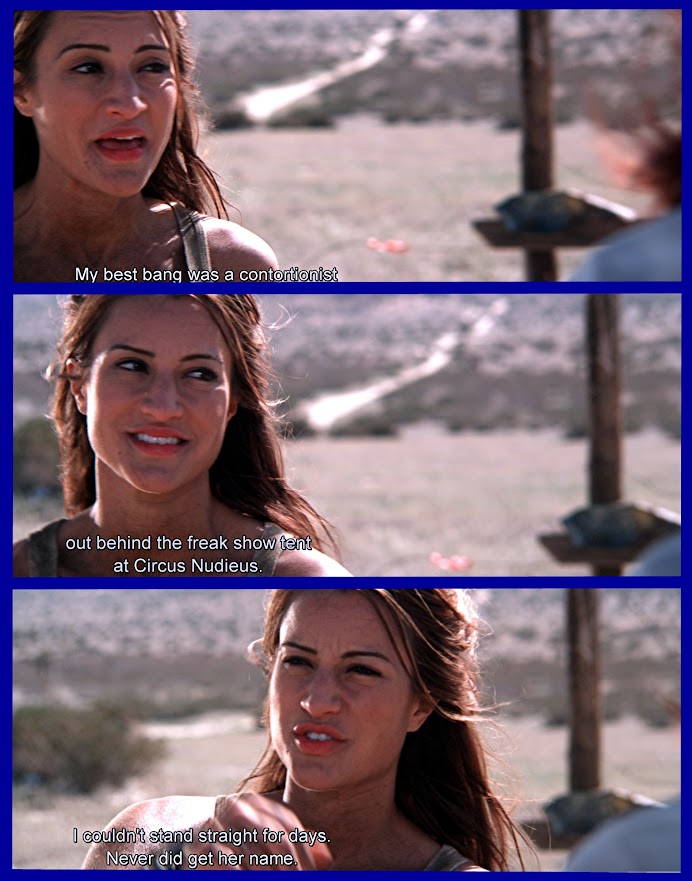 Also lurking around somewhere is Pinky, who apparently is the baddest badass on the planet although we don’t meet the character until late in the movie but you may guess the identity way before that happens.

At first, I thought all three of these women hated each other but I was proven wrong when Trixie and Hel hook up in the trailer, which thoroughly pisses off the addled-brain drug addict Camero.  To make matters worse, Hot Wire and Kinki show up to add to this mess.

And it is a mess. All the confusing flashbacks and split screens look really cool so they are done well. But after a while you have to think that the purpose is just to have a bunch of cameos by celebrities such as Lucy Lawless and Renee O’Conner pop up completely unrecognizable in their roles.  Right-wing jackass and ass-hat Kevin Sorbo also shows up and if I’d known it was him, that would have been the end of the movie for me right there and then.  The Flashbacks will get your attention but they do nothing to clarify what should be a rather simple story and the little information they provide could have been dispensed with just a few lines of dialogue early on.

Nobody is who they say they are, which only adds to the mess.  There is a water fight that adds nothing and isn’t any fun.  The torture scenes one would expect from a film like this are sprinkled throughout, but there is more than one fist fight scene and they go on and on for what seems like an eternity especially the totally ridiculous one towards the end.

I’m not going to sit here and criticize the acting by the leads because you can only work with what you are given, and let’s face it, do you really expect Shakespeare?  Not hardly.  Everybody does what they have to do in a movie like this which is spout witty euphemisms and spill blood.

Whether the makers of this film intended it to be a satire, a homage, or just a comical entry into the  grindhouse genre, it’s hard to say.  Maybe they would have done better cutting about fifteen minutes of the film and ditching most of the flashbacks.  There are a few outrageous fun scenes but not enough that you’d want to invest a lot of money in it, although at ten bucks, you might do it as I did because it’s still an interesting title to have on the shelf.  67 percent of the rating public gave it 5 stars at Amazon but for me, it’s just a C.