I may be wrong but it seems to me that on most days, I wish I could take my extensive movie library, my 4K Tv, my surround sound system and go off to a cave to live. I would never have to hear about nor live in the real world ever again. I’m just plain sick of having to read about the United States of Stupid, day in, day out, hour by hour, minute by minute, as the nation sinks further and further into a slimy abyss of mediocrity.

Stupidity has always been a driving force in this country. Education does not seemed to be valued and some schools have become nothing more than babysitters instead of educators. I know of teachers who in no way shape or form should be teaching children. Instead of instructing your kids, they are passing down their warped view of politics to be soaked up like a sponge and disguising it as Uh’mer’can History. I found this out a long time ago when I moved out here to California. I live in one of the far right hell holes that still exist. Think Kevin McCarthy and Devin Nunes, and you’ll know where I’m talking about. Those two are the most useless twats ever to fart in a Congressional Seat in DC. They know how to play to the dumb ass lemmings who will never for one second question any of the manure those two have spread from one end of the county, both Fresno and Kern, to the other.

This rant about stupidity is nothing new for me. I was just more quiet and subtle way back in the old days of the early 2000’s when I was named political blogger of the month in 2004.

I know a lot of dunderheads who voted for Donald Trump because they saw his idiotic shtick on The Apprentice and that was enough for them. People in this country have a very difficult time differentiating between reality TV and the real world. They’ll fixate on the fantasy worlds of The Bachelor, The Bachelorette, Survivor: Bum Fuck Egypt, Dancing with the Has Been Stars but not give two seconds of thought to the consequences when they hit that voting booth every November.

In those days I didn’t and still don’t watch much in the way of commercial TV. If I have the time to watch at all I’d just as soon binge watch on Netflix, Hulu, or Amazon. It’s how I watched Buffy, How I Met Your Mother, and The Big Bang Theory.

That’s why I was kind of stunned when I found out that in January 2015, Trump was still polluting the airwaves as a game show host. Even then his ignorance, scams and racism were well documented (see the original picture). The following post was one I made on my block and I am copying it here verbatim with the original image I used. The post was simply titled, Celebrity Apprentice. 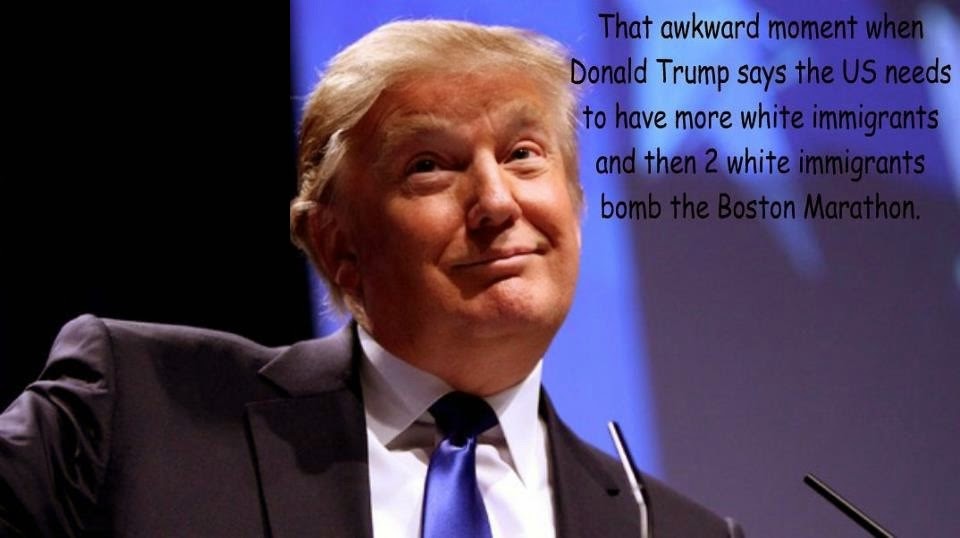 I don’t know why I thought that this stupid, idiotic, pointless, show was finished.  Going over the television listings, I see it is still with us proving once again that there are literally millions of brainless vacuum brained people out there who would watch a squirrel eat nuts if you put it on top of someone’s head.  Any hope I had for mankind left the building a long time ago, and a seventh season of Celebrity Apprentice won’t bring it back.

C’mon people, quit being The Stupid.

This was before His Royal Dummass announced he was going to run for president. But when he did, someone argued with me quite vehemently that there was no way he could win. I informed this person (can’t remember who it was) that he could very well become president because people in this country have grown so lazy and stupid, they can’t differentiate between reality and what they see on TV or at the movies. I even gave her a case history where some were elected solely because of their celebrity status. The main one was Arnold Schwarzenegger who damn near bankrupted the whole state of California.

People flocked to Arnold because they actually thought he was the guy in the movies and when he said shit like he was going to terminate the budget deficit, they drooled over him like a flock of cattle with hoof ‘n’ mouth disease. And he did balance the budget: By borrowing from the future income of the state with no clue what he was going to do when a few years later, he’d already spent the money and the cupboard was bare.

There’s a lot more I could write on this subject. And I’m sure I will. But right now I need to rest my aching arthritic body. But I’ll leave you with these two gems.

One thought on “I MAY BE WRONG BUT IT SEEMS TO ME THAT MOST DAYS I JUST WANT TO GO AHEAD AND HIDE SOMEWHERE.”