If there’s one thing I’ve learned, there are some thing in this world that are sacred to a lot of people.  I found this out years ago when I wrote a review that was quite critical of the original Disney film, Pete’s Dragon.  It turns out that many of the Disney classics, good or bad, are sanctified to be beyond criticism by a lot of people.

And so it goes with Doris Day. I love Doris Day.  I think she’s great in every way possible.  But she made some bad movies throughout her career and some people think I shouldn’t point that out.  Just as I do here.

And with that little preface, I bring you another round of May I Have the Envelope please that I dug out of my Clyde’s Stuff archive.

I had just about made up my mind to go on a Netflix John Wayne Movie kick, but instead decided to go with Doris Day.  This was due mostly to the fact that her film, Move Over Darling, had ended up in the top of my queue thanks to Netflix’s refusal to send me the movie I’ve been waiting on for a month.   More about that in another post if I have to wait much longer.  These are films I hadn’t seen in years so I couldn’t pass judgment until I re-watched them.  I had fond memories of them, but would those fond memories hold up in 2011?

The first film I watched in this trio of Doris Day films was Please Don’t Eat the Daisies.  There were only two things I remembered about this film.  The first is that one of the kids spends most of his time in  a cage saying “Cokey Cola”.  Think of it as a 1960 early placement ad, and a lot catchier than having him say Pepsi Coley.   The other thing I remember is the theme song, sung by Doris Day over the titles and then later in the film with a group of kids from a school where Kate Mackay (Doris Day) does volunteer work.  As for my spelling of “Mackay,”  it comes from the IMDB.  Netflix probably pulled the spelling on the envelope out of their ass.  And there’s something else about this particular Netflix envelope that fits right in with the theme of the movie.  More about that at the end of the review.

This film was based on a best selling book by author Jean Kerr.  The novel, if you want to call it that,  was more of a series of humorist essays dealing with the life of her and her husband, critic Walter Kerr, when they moved to the suburbs to raise their kids.  So the movie does have at least this in common with the book:  It doesn’t have much of a plot.

Unfortunately, if Kerr’s book was actually funny (I don’t know, I haven’t read it, so send me a copy and I’ll review and compare), the screenplay writer, Isobel Lennart, forgot to include any of that here.  Instead we get a formulaic picture that even TV 60’s Icons, June Cleaver, Donna Stone, and Joan Nash, who played the lead female character in the TV series of the same name would have a problem with.  They may have been dutiful housewives, but I doubt any of them would put up with the crap Larry Makay deals out to Kate.  Not even they would have bowed down to and kowtowed to their husbands in the subservient way that Kate MacKay does here.  Making matters worse, Larry Makay (David Niven) is a total jackass.  Oh forget that, let’s not mince words.  He’s an asshole.

Their kids are total brats, and most of the blame for that is laid on Kate by not only her husband but her very own mother as well, who for some inexplicable reason, continually sucks up to and sides with Larry throughout the film.  I don’t know if these little darlings were modeled after Kerr’s real life offspring, but I can only hope for her sake that they weren’t.

But it’s easy to see why these kids are such monsters. When it comes to their upbringing, Larry is totally absent from dusk till dawn and beyond.  He’s pretty much a shitty father figure.  He expects Kate to be there to cater to him, and in fact she does just that,  from the opening credits to the end when she decides to cave once again to Larry, even though he’s just a big jackass with a moustache.

It’s not a total loss.  Doris Day, does a great deal with a thinly developed underwritten character.  Whether she meant to or not, she often makes us feel sorry for her when I suppose we should be laughing.  Still, I wanted to take Kate and shake her when SHE apologizes to Larry, right after he has nastily and almost cruelly browbeaten her at one point.

Then there  is the catchy title song which will stick in your head long after the movie is over. As for why the title fits the movie, it takes all of about three minutes of the film to dispense with that explanation.   But most Doris Day movies have that kind of a song somewhere in them.  Also included is  the song “Any Way the Wind Blows” which is nice, in a cute, cuddly and adorable kind  of way.

Trivia Note: You’ll recognize Stanley Livingston as one of the kids.  He went on to making a career out of being Chip Douglas, the son of Steve Douglas (Fred McMurray) on My Three Sons.  I view that as a promotion.

I thought about saving this film for a more in depth review under the “Clyde’s Movie Palace Banner” and I still might write  that eventually.  But this movie didn’t entertain me.  It just irritated me for the most part which is why I probably had erased the memory of it long ago.  And what was the other clue about this film apparent on the envelope that I mentioned earlier?  The fact that Doris Day’s character is referred to as only “Larry’s Wife.”  See, even Netflix tried to strip her of her identity, just like Larry and because of that nonsense we can do no better than a  C-.

I know I saw this movie once on television years ago, and my fast fading memory tells me that I didn’t care for it way  back when.  And as it turned when I watched it a few nights ago, that’ memory is pretty much right on the money.  There’s just not a lot here to recommend this film.  Even the great chemistry between Rock Hudson and Doris Day that was apparent in films like Pillow Talk and Lover Come Back, is totally absent here.  The plot is just as depicted on the Netflix Envelope, with one caveat:  It is actually thinner than the paper it is written on.

Unlike their other outings, this film opens with Doris and Rock already married.  And then you spend the rest of the film trying to figure out whatever brought George and Judy together in the first place.  Hudson’s hypochondria, makes him an obnoxious bore, and the fact that this movie depends on the old gimmick of someone mistaking a conversation to be about himself, doesn’t help.  Excuse the pun, but that’s pretty much a dead premise that is not ripe for laughs.  You and I both know that in such a situation, the  first thing that a person is going to do is confront their doctor.

The rest of the film deals with Rock trying to find a suitable husband for Judy, because God knows she needs someone to take care of her after he’s gone.  Clint Walker seems to be a prime candidate.  He’s single, attractive, and successful.

From there we get more misunderstandings and misinterpretations complicating matters further.  The fact that all of this is resolved by a visit from Paul Lynde’s grave selling character at the end of the film tells you how easily all of this could have been dispensed with in the first place.  In essence, there’s not enough here for a half hour TV special, let alone an hour and forty minute film.  The good things are  another Doris Day stay in your head for weeks theme song, Tony Randall as George’s Best Friend Arnold, ( his writing and  then erasing what he wrote for George’s eulogy is hilarious) and the ever dependable Paul Lynde as Mr. Akins, the cemetery salesman.  Norman Jewison directed, but I guess everybody has to start somewhere.  On the basis of the fact that Hudson’s Hypochondria is less irritating than Niven’s Drama Critic, we have no choice but to give Send Me No Flowers a C. 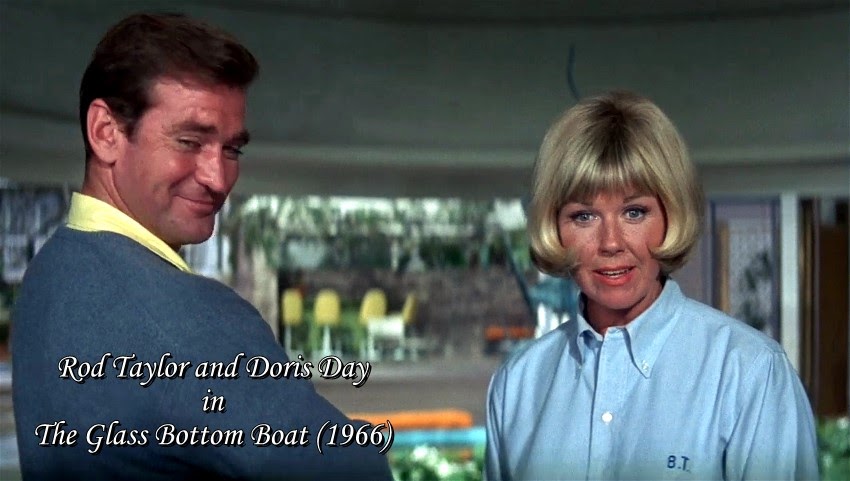 Last but not least is one of two Doris Day outings  with Rod Taylor.   I do remember seeing this when it was released back in 1966.  I liked it then and after watching it again, I still do.

Although “The Glass Bottom Boat” is the title of this film, it is only relevant to the proceedings  because of another patented Doris Day theme song, and to the first ten minutes or so of the film itself that starts the plot wheels turning when Bruce Templeton snags Doris’s mermaid outfit.

And although the plot is another studio  lesson in simplicity, it’s a lot more entertaining than the previous two films here, helped along by the fact that Rod Taylor actually has some chemistry with Day, and the plot manages to hold up for the entire hour and fifty minutes.  Needless to say, he is smitten with her and she becomes smitten with him.  Kudos to whoever decided to make the Day character a widow as well.  I don’t think we could have bought into this  if they had made her a 42 year old single gal, virginity intact.

Yes, this movie depends on a lot of  misunderstandings and mistaken identities, (Doris Day as a double agent spy?  Get real) but we can buy into it because it’s the usual kind of government  authority figures that manage to muck things up. So on that score, it’s at least realistic.

Some good sight gags, some good co-stars, with character actors like Alice Pearce and George Tobias (Gladys and Abner Kravitz from the TV show Bewitched), Paul Lynde, Dom Deluise, Dick Martin (from Rowan and Martin’s Laugh-in), Edward Andrews (also played the doctor in Send Me No Flowers), John McGiver, and Ellen Corby  (Grandma Walton) along for the ride.  Also watch for a cameo by Robert Vaughn who played Napoleon Solo in The Man From Uncle.  On a useless bit of trivial trivia note:  the house George lives in was actually used for a two part Man From Uncle Episode. 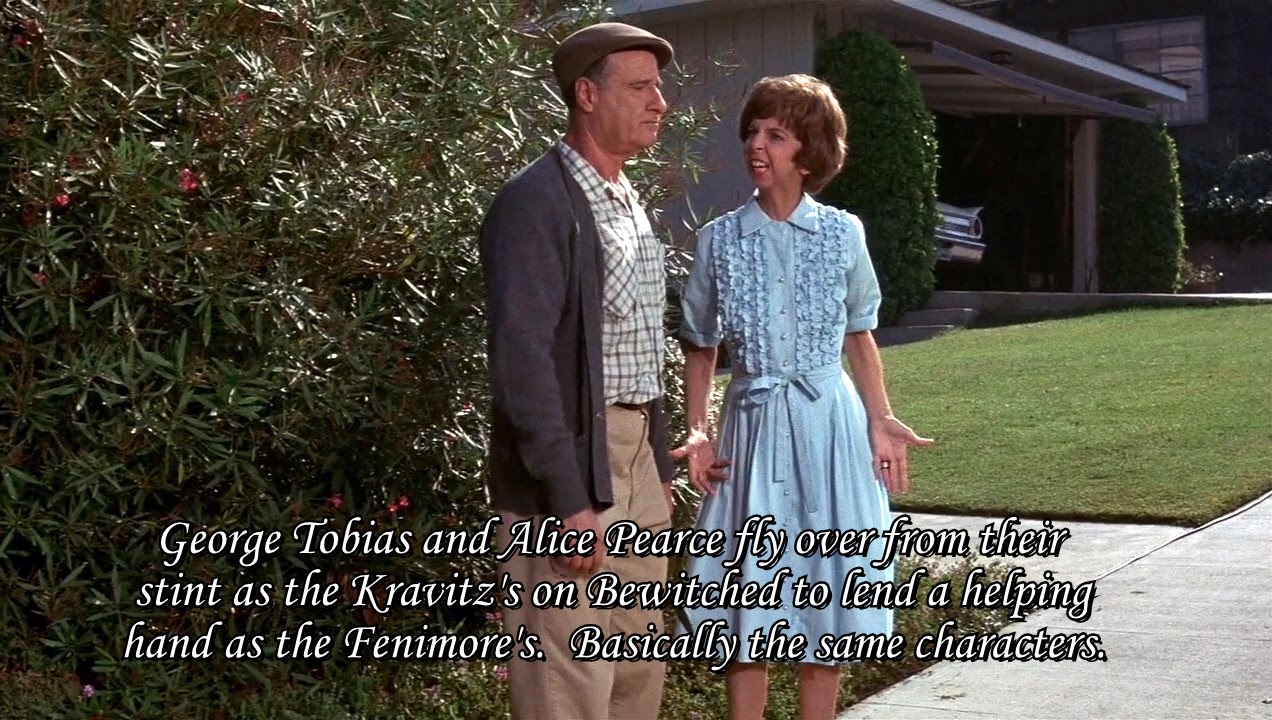 If you rent the film from Netflix, please be sure to check out the special features.  There’s one in particular dealing with the fashion designs of this film, and Day is shown modeling her mermaid costume in a screen test.  What can I say except that she may have been 42, but she was still built like a 20 year old brick shithouse.  So taking that into consideration, I have no choice but to bestow a score of B- on The Glass Bottom Boat. And if you want to watch Rock Hudson and Doris Day, my recommendation is for Pillow Talk and Lover Come Back.